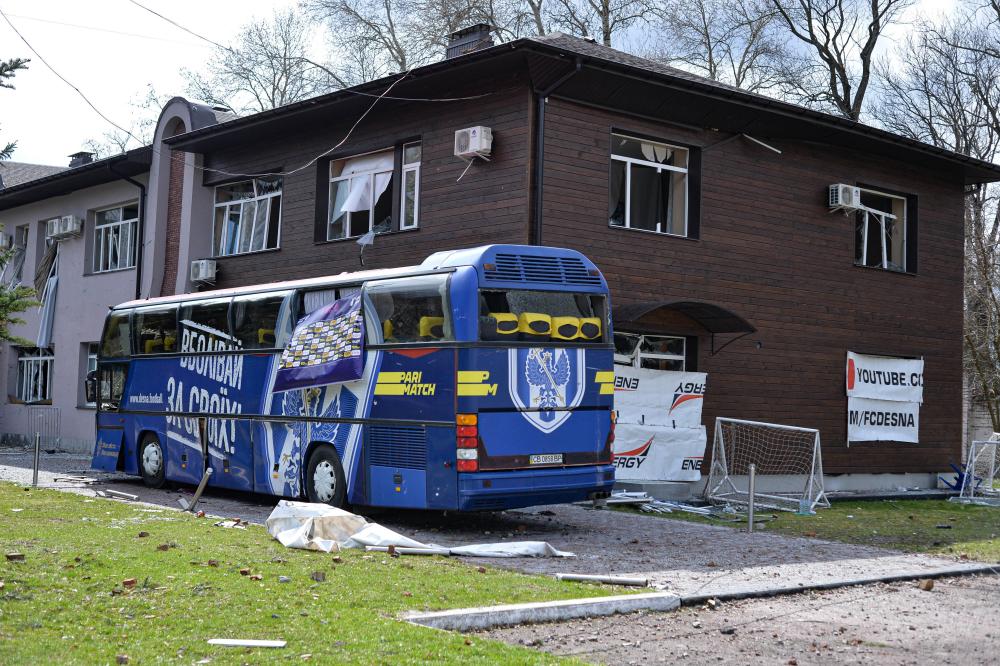 Chernihiv is the largest Ukrainian city to have been freed from Russian occupation. Its pre-war population was estimated at around 280,000. After being under siege for more than a month only a third of that figure remains. Seven hundred people have lost their lives, according to official sources.

Before the Russian invasion on 24 February, the city was little known around the world. It is situated 150 kilometres northeast of Kyiv and just 60km away from the border with Belarus, on the banks of the Desna river. In Ukraine, Chernihiv was known for its wonderful churches, chic parks and great promenades by the river.

Related: Oleksandr Zinchenko: ‘If you stay silent it means you support what is happening in Ukraine’

The new reality for those left behind is tough. Coming out from their hideouts after more than three weeks without electricity or running water, they are met by huge craters and wrecked structures. There are mountains of steel, concrete, glass and plastic. Here and there, torn posters and paintings, as well as small pieces of metal adding to a truly dystopian scene. Everywhere there are buildings – including hospitals, schools, libraries and residential blocks – that have been destroyed.

One of the places that lies in ruins is the local football ground. Sadly, it is a perfect illustration of the effects that the Russian invasion has had throughout Ukraine. Before the bombs destroyed it, it could hold 12,000 people – the local side, FC Desna, played in the Ukrainian Premier League there, as did the women’s national side.

Now, it has been reduced to rubble. The stands are destroyed, the windows broken. What remains of the once proud stadium has been left with metre-long cracks. In addition, items including gym equipment, TVs and other accessories were stolen from the offices. On the pitch, meanwhile, there are craters as deep as four metres.

“At least five rockets hit the stadium. It’s all destroyed,” says Oleksandr Lomako, Chernihiv’s regional governor. “This is civil infrastructure. The club had no military connections, there were no soldiers, no equipment, nothing. We used this complex for adults as well as children. From 24 February, Chernihiv was under constant shelling.

“All the buildings that have been bombed are part of the civil infrastructure,” he adds. “What will the kids do now? Where will they train once the war is over?”

“After the enemy blew up the bridge over the Desna river, Chernihiv became an island,” the Chernihiv deputy regional governor, Dmytro Ivanov, explains. “The Russians circled the city then started bombing our food supplies, our humanitarian aid, as well as the gas stations. There was no electricity; hundreds of people were dying. We could not even bury them.”

As recently as the 2019-20 season Desna enjoyed their best-ever campagin, qualifying for Europe after finishing fourth in the league. They played German club Wolfsburg in the third preliminary round of the Europa League, losing 2-0 in a single-legged qualifier. Before the war started, Desna were seventh in the Ukrainian league.

The stadium has a proud history – and a surprising former name – too. In 1961 Yuri Gagarin became the first human to travel into space. The then 27-year-old became a hero throughout the world, and the Russian communist authorities awarded him the Order of Lenin and the title of Hero of the Soviet Union.

Related: ‘I cry every day’: in the stands with Ukrainians as Dynamo Kyiv play again

Three years after earning global acclaim, Gagarin visited the stadium in Chernihiv to meet his fellow cosmonaut, Andriyan Nikolayev. The moment needed to be marked, so the stadium was named after Gagarin. Despite it now being renamed to the Olympic sports training centre, the locals still call it “The Gagarin”.

All is not lost. Local and national authorities have promised the club that the stadium will be rebuilt. The Ukrainian culture minister, Oleksandr Tkachenko, has held talks with his German counterparts, who assured him of their support. Borussia Dortmund have also promised to help out. “They have not forgotten Andriy Yarmolenko,” Tkachenko said, referring to the West Ham forward who grew up in Chernihiv and started his professional career with Desna, before moving on to Dynamo Kyiv and Dortmund.

Help may be on the way but Desna supporters have already gathered to clear up at their stadium. At the weekend a symbolic amateur match was even organised at the Gagarin, on the side of the pitch where the bombs did not land. Football is injecting some life back into the stadium and the club’s faithful.

The first team manager, Oleksandr Ryabokon, joined the Ukrainian defence forces at the beginning of April. “He’s clearing Kyiv of Russian creatures,” a Desna club spokesperson says. The Under-19 coach, Oleksandr Zub, is also part of the military operation, as are the club’s ex-owner, Ivan Chaus, and former player Dmytro Zaderetsky.

Together with Mariupol and Kharkiv, Chernihiv is now a “hero city” following a decision by the president of Ukraine, Volodymyr Zelenskiy. Ukrainian soldiers have promised the city’s residents the Russians will not return but, having witnessed the atrocities over the past two months, the people are afraid to believe them.

“We don’t know when and how this war will end,” says a Desna supporter called Oleg. “We are normal people, but our normal lives have been taken away. We just don’t understand why someone would attack and kill innocent civilians.

“I go to the stadium every day with a couple of friends. It’s the only place in the city where you can hope to hear the voices of some happy children. It is football, the memories it brought us, and the hope of a normal future, that keeps us going.”