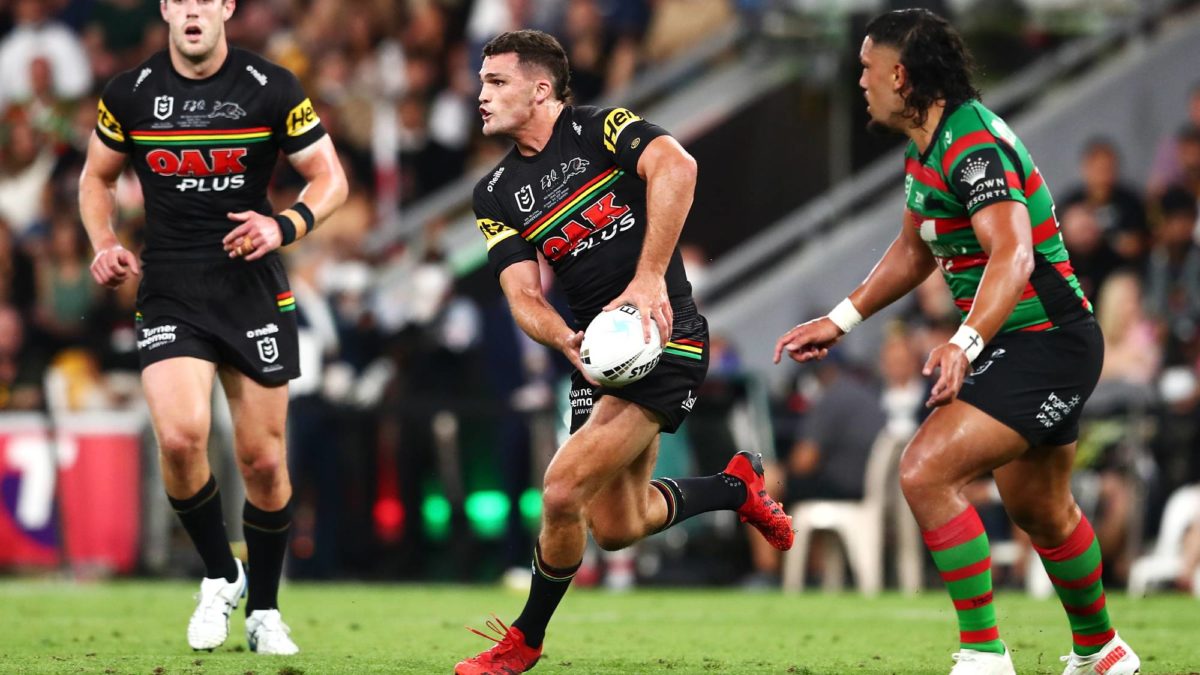 Teams have been announced for Round 4 of the 2022 NRL season with Panthers star Nathan Cleary’s return from shoulder surgery confirmed for the grand final rematch against South Sydney on Friday night.

Cleary was close to making a return last week but Penrith opted to give him another week to prepare for the blockbuster against the Bunnies at BlueBet Stadium.

Representative forwards James Fisher-Harris (shoulder) and Liam Martin (hip) have been included in the extended squad but will need to pass fitness tests to be late inclusions. NSW coach Brad Fittler said on Wide World of Sports it looked like the Panthers were “playing shenanigans” with JFH and Martin and expected them to be part of the game-day 17.

Cowboys prop Coen Hess is out of Saturday’s night’s stoush with the Roosters due to a shoulder injury with Jamayne Taunoa-Brown replacing him in the game-day 17.

The visitors will be without coach Trent Robinson for Saturday night’s tussle in Townsville with the Cowboys after he tested positive to COVID-19 on Tuesday.

Warriors halfback Shaun Johnson is also set to make a comeback from injury in his team’s Saturday stoush with Brisbane at Redcliffe. The veteran playmaker was supposed to be out for another week or two with a pectoral strain but has been named on the extended bench.

The Titans have suffered a blow before Thursday night’s clash with the Tigers with veteran forward Isaac Liu ruled out with COVID.

Suspensions to Knights forward Mitch Barnett, who was referred straight to the judiciary, and Dragons second-rower Jaydn Su’A have also forced line-up changes.

The NRL announced that St George Illawarra prop George Burgess, who was withdrawn from their squad last week, would not be stood down on an ongoing basis despite facing a charge of sexual touching without consent following an incident in Sydney earlier this month. He has been named on the reserves bench in the No.24 jersey.

With young fullback Jayden Campbell out with a rib injury, coach Justin Holbrook has brought in recent recruit Jamayne Isaako. Corey Thompson has been named to make his first start of our 2022 campaign, after recovering from a hand injury that has kept him out of the first three rounds. Thompson is named on the wing and will replace Phillip Sami, who will miss the game due to COVID protocols.

Isaac Liu is also out with COVID, replaced in the starting side by Jaimin Jolliffe, with Jarrod Wallace promoted to the interchange.

Tigers: The only winless team in the NRL is desperate to break their duck after a controversial loss to the Warriors last Friday. James Roberts (quad), Ken Maumalo (ankle) and Kelma Tuilagi (head knock) return to the side. Stefano Utoikamanu has undergone ankle surgery and is expected to miss 6-8 weeks.

With winger Ronaldo Mulitalo available after sitting out last week with a head knock, he replaces Matt Ikuvalu (ankle). Centre Connor Tracey has also been ruled out with a groin problem, meaning Siosifa Talakai switches to centre. Second-rower Teig Wilton returns from suspension. Aiden Tolman will play his 300th NRL game after previous stints at the Storm and Bulldogs.

Mitch Barnett’s suspension means coach Adam O’Brien has been forced to make some changes. Brodie Jones has been named to make his first start of the season in the second-row after overcoming a thigh injury as well as COVID-19. Kalyn Ponga, who has missed the past two matches with a knee problem, has been listed to play at fullback.

Nathan Cleary is back in the No.7 jersey after being named on the extended reserves last week and then withdrawing before game day. Representative forwards James Fisher-Harris (shoulder) and Liam Martin (hip) have been included in the extended squad but will need to pass fitness tests to be late inclusions.

Sean O’Sullivan was not selected in the squad due to a minor foot complaint.

After their breakthrough win over the Roosters last Friday, the Bunnies now turn to getting whatever revenge they can from their grand final nemesis. They have retained the same squad from Round 3. Blake Taaffe has been listed as 18th man after missing the first three rounds with an ankle injury and could get a late call-up to the game-day side.

Shaun Johnson is a chance of making an early return from a pectoral strain. He has been named on the extended reserves and could start in the halves ahead of Chanel Harris-Tavita or Kodi Nikorima. Fellow playmaker Ash Taylor is still out with hip damage.

Interchange forward Bayley Sironen (COVID) is out until next week.

The rib injury to forward Jordan Riki means he is under a cloud but has been named. Maroons forward Kurt Capewell has a calf problem and is on the reserves. Thomas Flegler is back from a ban from last season on the interchange. Ryan James has been promoted to the starting side. TC Robati returns on the bench with Corey Jensen dropping to the reserves.

After their one-point win over Canterbury lifted them from the bottom of the ladder, Manly welcome back prop Josh Aloiai from suspension, who has not played at all this year. He is in the reserves with the game-day 17 unchanged.

Following their comeback win over the Titans last week, Canberra have named Nick Cotric on the wing after he sat out the past two weeks with a thigh injury.

The only sour note to their win over the Broncos in Brisbane was a shoulder injury suffered by prop Coen Hess. He is out with Jamayne Taunoa-Brown replacing him in the game-day 17.

With Trent Robinson forced into isolation after contracting COVID-19, assistant coach Jason Ryles will take the reins for the first time at NRL level. Daniel Suluka-Fifita replacing Fletcher Baker on the bench is the only player change.

Speedy winger Xavier Coates is being hampered by a hamstring injury but has been named to play. Harry Grant’s return from COVID means Brandon Smith heads back to the bench and Nick Meaney and Chris Lewis have been relegated to the reserves.

Second-rower Jack Hetherington has been sidelined long term after suffering a serious shoulder injury in their loss to Manly on the weekend. Corey Waddell has been promoted to the run-on side to fill the gap.

The loss of Ray Stone for the rest of the year with a torn ACL is a blow to Parramatta’s forward depth. Ryan Matterson (hamstring) is hopeful of making a return this weekend.

The absence of Jaydn Su’A due to a high tackle suspension and winger Cody Ramsey’s hamstring problem have forced Anthony Griffin to shuffle his line-up. Mat Feagai is in for Ramsey and Jack Gosiewski will start instead of Su’A in the second row.