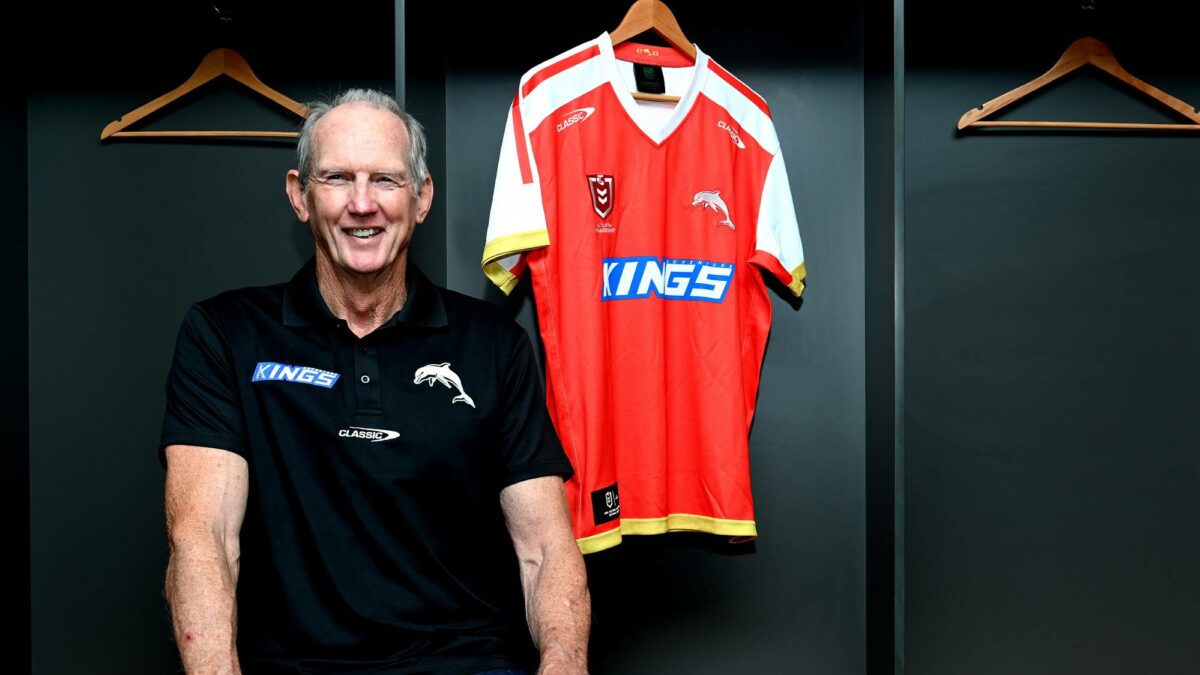 Wayne Bennett and the new Dolphins franchise need to pick and stick to succeed in their first year in the NRL, according to one of Australia’s leading sports analytics firms.

The new expansion team are currently red hot favourites with the bookies to finish dead last – PlayUp have them $3.25 to take the spoon in 2023 – with Newcastle, the Warriors and the Titans next worst off.

Expansion teams have largely suffered, understandably, with building a team from scratch to match groups that, even if they are poor, have at least some collective understanding.

Gain Line Analytics, the sports analytics company founded by ex-Wallaby international Ben Darwin, are experts in measuring cohesion across sporting teams, and Darwin explained how tough the Dolphins are likely to have it on entering the 2023 edition of the NRL, which is more coherent than any other iteration of the competition.

“Whenever we look at a competition, there’s a number of things that we think about from the beginning,” said the former prop, who played 28 times for the Wallabies in the early 2000s and went on to found Gain Line in 2013.

“With expansion teams, if they are coming into a competition that is well-established, it is harder for them to be successful.

“If you look at the AFL, it’s the highest cohesion league in the world, so to bring a team in, it generally takes about five years for that team to be competitive.

“Over the history of the NRL, there have been times where the league has not been competitive and you had a lot of newly-established teams entering at the same time.

“In 1988 and 1995 you had three then four, and after the chaos of Super League, you had the Melbourne Storm who were able to be reasonably successful from the outset.

The Melbourne Storm won the 1999 #NRLGF in the most unlikely of circumstances ???? pic.twitter.com/4AWiqD6cAq

“That’s no longer the case: the Dolphins are a low cohesion team coming in to a reasonably high cohesion league, more so than even when the Titans came in (in 2007). That’s the first component that works against them.

“The next part is what teams put up against them. If you make a small amount of changes to a team, you can change that team quite dramatically: two or three changes can change about 50% of the nature of the team, especially if they’re in the wrong positions.

“That will give the Dolphins a chance early in the season, particularly if teams aren’t taking them seriously.”

The key, according to Darwin, will be to pick at best 17 and stick with it, even if results don’t initially go their way. If they do, they could overhaul more established teams who may chop and change if they are also not going well.

“You generally expect the league to become more cohesive as it goes through the year, which we call ‘back-ending’,” he explained.

“The Cowboys in 2022 dramatically improved their cohesion and as the season continued, they came home like a freight train.

“The Dolphins can take advantage of that because there’s no expectations on them. If they’re 0-20, it’ll be fine, because Wayne is very patient and he’s consistent in the teams that he builds.

“As the season goes, the Dolphins could improve their cohesion and back-end it to catch a number of teams.

“Some teams last year finished the year with poor cohesion numbers, because they lose and make changes. If teams don’t change they can improve cohesion and if they change too much they can actually go backwards.

“Newcastle have done that a few times, going from good to bad as the season goes. The Broncos last year flat-lined because they kept changing their team and everyone else sailed past them. By the end of the year their numbers were awful.

“You could get enough cohesion into an expansion team in five games for the amount that Wests Tigers had by Round 25 last year. They were that bad.

“A team like the Dolphins, if they are consistent enough, could get a number of wins from Round 20 onwards as other teams panic.”

Bennett won’t start from complete scratch, either. He has the Bromwich brothers and Felise Kaufusi, who have plenty of time together at Melbourne, the Lee cousins, several from both the Titans and Broncos systems and even a few from Redcliffe’s Q Cup side.

Their spine has never played together before, however, and they will need to gel fast. Anthony Milford will likely play at six and Hamiso Tabuai-Fidow at one, with Sean O’Sullivan at halfback and Jeremy Marshall-King in the hooking role.

Having three of those four as late arrivals to preseason following the World Cup isn’t ideal, says Darwin, given the short time to build, but fortunately for them, the spine tends to come together more quickly than the rest of the group.

“Their spine hasn’t played together before, but a four-piece orchestra will learn a piece of music together faster than a full orchestra,” he said.

“The attack gets going quicker than the defence because defence has to happen as an entirety. In rugby union, for example, you get the set piece attack going first but the defence takes the longest.

“The Dolphins also have pre-existing cohesion. They’re not starting behind the eight ball. With rugby league, your attack is effective first and your defence comes later. Rugby union is the same but in a slightly different way.

“For the Dolphins, how long it takes for their defence to get going is how long it will be before they are truly competitive.

“They won’t be as cohesive as everyone else, obviously, at the start of the year. But if they are stable through the season it won’t take them long to catch up, and if they catch up, they could have a good back end to the season and lead in to 2024.”