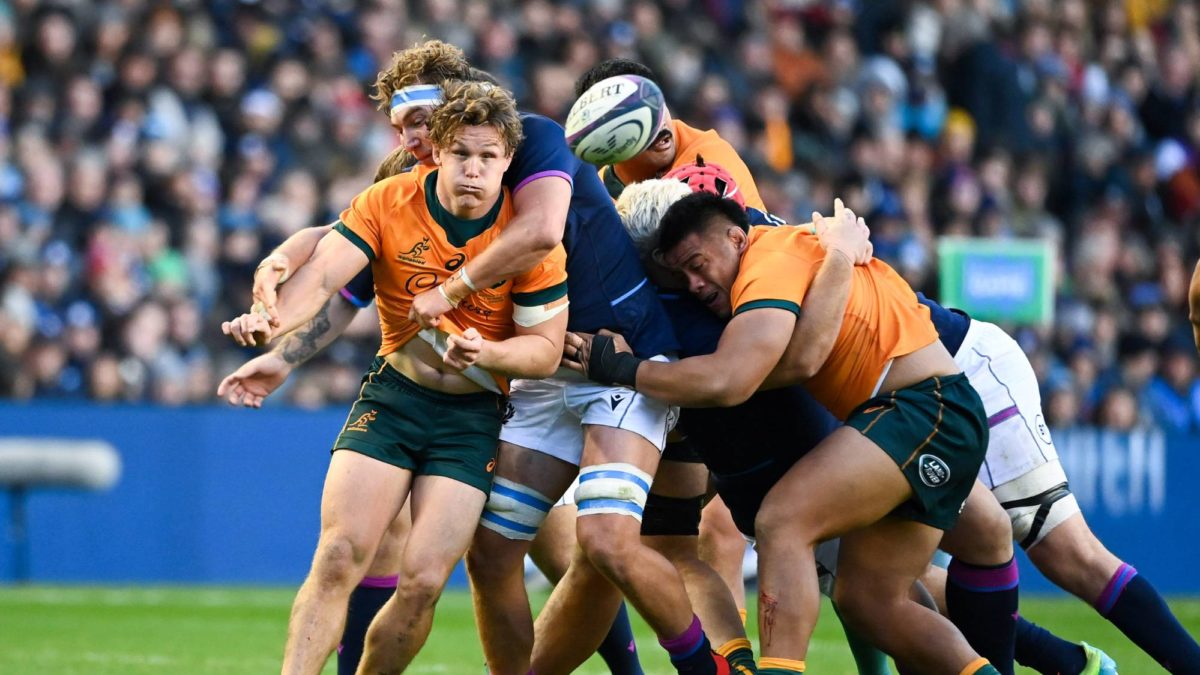 Michael Hooper should have won the accolade for World Player of the Year – and if not Hooper, then Samu Kerevi. The truth is that the winners of such prizes are, more often than not, towed in by the success of the teams in which they play.

France finished 2021 on a high, with a rousing win over New Zealand, and that was enough to push the claims of their number 9 Antoine Dupont a nose ahead of everyone else on the list.

Before that victory, they had lost a July series in Australia (without the Toulouse scrum-half) and botched a Six Nations tournament that they should have won (with him) at the turn of the year.

Meanwhile, Wallabies coach Dave Rennie was in no doubt about the value of his captain, as his comments midway through the Rugby Championship amply illustrated:

“If people questioned his ability as a player, I’m gobsmacked. If you talk to players all around the world, he’s hugely respected.

“People’s opinions are often reflected on the success of a team, and he’s been the captain, so because the team loses and he’s the skipper that responsibility is on him.

“He’s a Wallaby great. If he was playing in a different era with a team full of experienced and seasoned players and you’re dominating the world, you’d go down as one of the best players in the world. I still think he’ll get that mantle.

“He’s just so resilient. Even the other day against the All Blacks, Brodie Retallick splits him open, he gets 20 odd stitches, puts a hat on and jumps back on out there and gives the same intensity.”

As a former coach of the Chiefs and Sam Cane in New Zealand, Rennie knows his onions when it comes to number 7s. No mention of rag-dolling, or any physical unsuitability for the position in which he plays.

Hooper had his finest season in the gold jersey in recent memory in 2021, and it is worth the effort to dig down into a deeper stratum of reasons for that uplift in performance.

According to the raw stats, in the 2021 Rugby Championship Hooper was either setting the benchmark, or matching it in any number of different categories: first in dominant tackles (all players), sixth in the number of tackles made overall; first in ruck attendances on both sides of the ball, joint third in breakdown steals; second in clean breaks, third in carry metres and fourth in the number of carries (forwards only).

Looking further, out beyond the shiny surface of the stats, it becomes clear that both the refereeing of the game and the new team-build under Rennie changed to suit Hooper better in 2021.

Let’s start on attack. Australia are not New Zealand. The All Blacks scored 57 per cent of their tries in the Rugby Championship from changes of possession – turnovers and kicks return – with only 43 per cent coming from set-piece starters. The Wallabies are a different beast even when coached by a Kiwi: 74 per cent of their tries derived from lineout or scrum, and only 26 per cent from changes of possession.

That makes a fundamental difference to the role of the number 7, who has to be more active on attack, where New Zealand opensides tend to be tackling machines and turnover merchants on the deck.

Both ‘the Australian way’ and Rennie’s selection changes after the trifecta of defeats in the Bledisloe Cup series fitted the way Hooper likes to play. In came Kerevi at 12 and Quade Cooper at 10, to be followed by Nick White at 9 for the final three matches of the tournament.

It didn’t matter one jot that Hooper was dwarfed by a massive Springbok back-row in the double-header versus the world champions. From set-piece, Kerevi’s unrivalled power on the advantage line gave Hooper mostly an easy target at the first ruck. This meant he did not have to make a ‘hard cleanout’ on the initial phase and could reserve his energy for the phases thereafter:

The Wallaby captain does not need to make a meaningful impact on Damian de Allende because Kerevi’s initial penetration has been so decisive. After one more drive phase from Matt Philip, Australia has made over 15 metres up to the edge of the Springbok 22 and the situations looks like this: 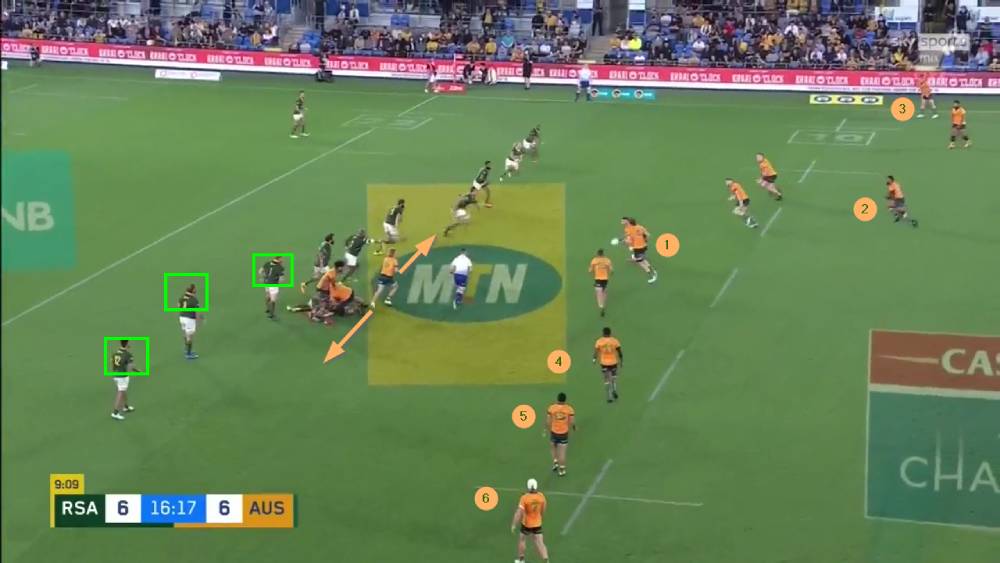 The scoring play eventually goes to the right through Cooper, Kerevi and Andrew Kellaway, but it could just as easily have come left, where the combination of Marika Koroibete, Len Ikitau and Hooper are mismatched against de Allende, Duane Vermuelen and Steven Kitshoff.

A number 7 is not picked to provide power, he is there to play off power and provide the linking play on attack. It is only at the first ruck in midfield where his cleanout skills will be definitely required. By third phase everyone will be playing in their allotted channels and responsible for the ball retention in those zones:

Kerevi and Bobby Valentini supply the power on first phase from lineout, with the Australian number 8 knocking de Allende back six or seven metres in contact. Hooper only has to make nominal attendances at the first two rucks, and that frees him to make the break from acting halfback on third phase.

Kerevi only failed to breach the ad-line on two occasions in two matches versus the Springboks:

Samu brushes off Franco Mostert to make the initial bust, and Hooper pushes Siya Kolisi in the opposite direction to the intended play thereafter. Kerevi made yards even when receiving a bouncing bomb from the set-piece:

Once again, he drives straight past the shoulder tackle of Lukhanyo Am, and that means Hooper has only to make incidental contact with Kolisi at the first ruck, in order to set up an inviting 50-22 kicking opportunity for White.

The new guidelines at the breakdown, forbidding head contact and therefore the ‘blast’ cleanout, have worked in Hooper’s favour:

The use of direct power at cleanout time is far more risky, with any contact to the head likely to attract a card, and attacks on the legs or lower body area also liable to sanction under the latest guidelines.

Technical accuracy is at a premium, and this is Hooper excelling in a one-on-one removal of one of the best jackals in the world, huge South African bomb squaddie Malcolm Marx: 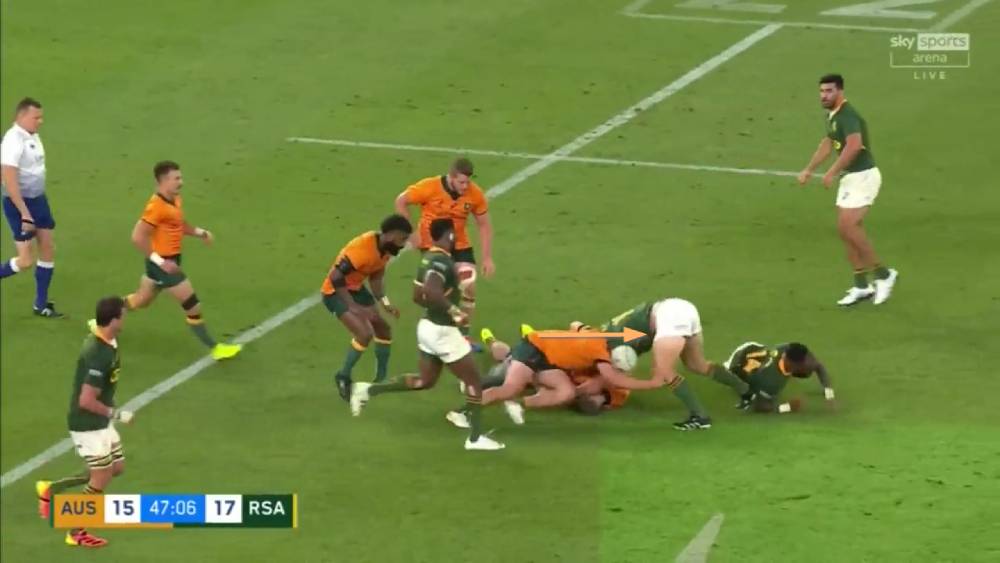 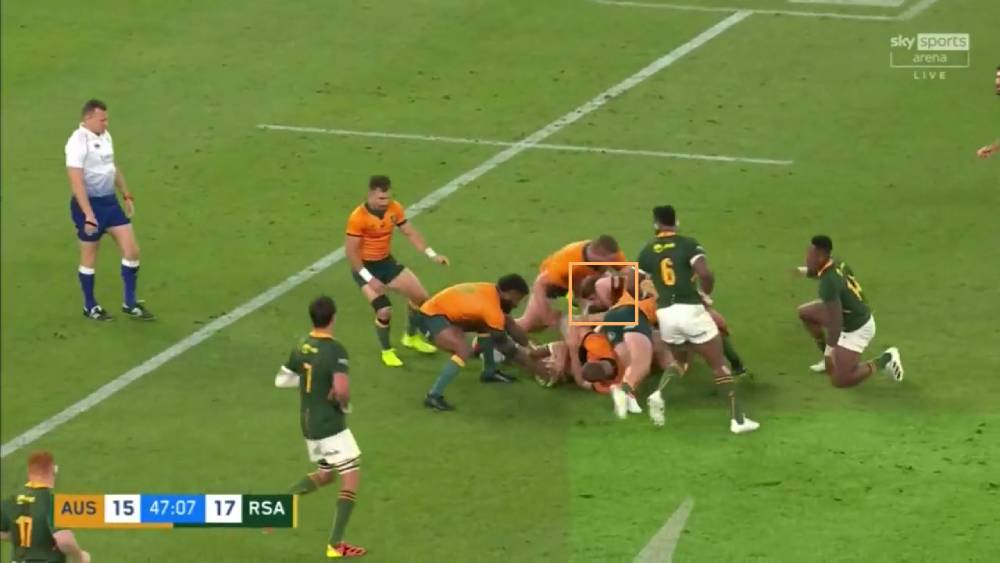 He enters low – lower than Marx – and hooks the left arm before drilling across the middle line of the ruck. It is a development that does not suit South Africa nearly as well:

Kwagga Smith tries to remove Hooper with the shoulder but misses, and ends up having to drag the Aussie off the ball. That means a four-second delay in release, and the Springboks never advance beyond the Australian 40m line before they have to kick the ball away.

On defence, I have examined several instances of effective Wallaby counter-rucks in previous articles, where Hooper is once more ‘playing off power’:

In the first instance, Valetini is the tip of the spear winning the physical battle versus Am, and Hooper is the ‘everywhere man’, on hand to push the counter-ruck across the finishing line. In the second it is Koroibete providing the initial power, and Hooper joining as the second man to convert opportunity into turnover.

The new guidelines have also helped Hooper become a more effective contestant at the post-tackle: 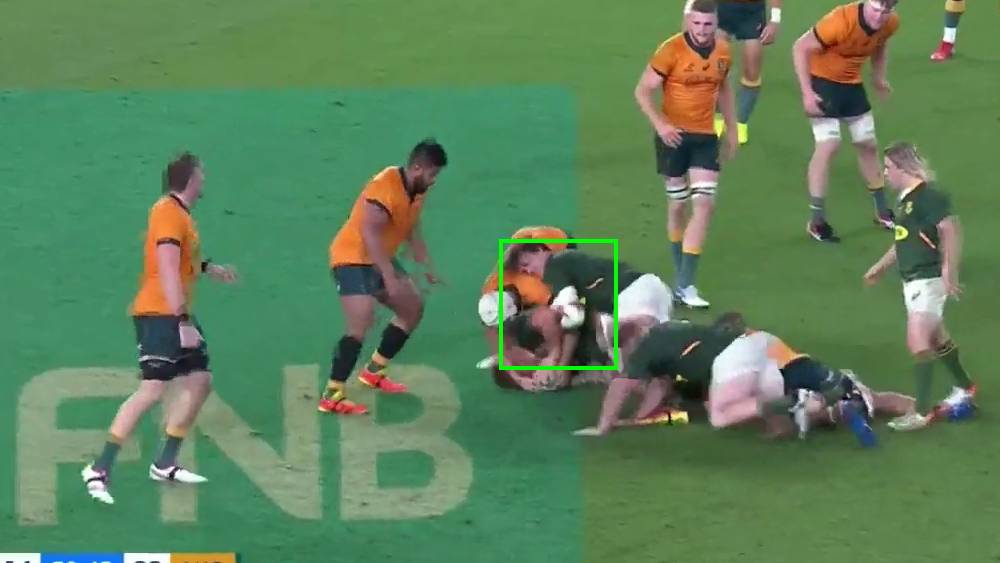 The rules are designed to produce faster outcomes, whether it is lightning-quick ball for the attack or quicksilver turnovers for the defence. That means Hooper does not have to survive the cleanout for more than three seconds, and he is less likely to be on the receiving end of the kind of oncoming ‘blast’ which effectively ended David Pocock’s career with a neck injury.

Getting to the tackle early, and achieving quick ‘lift’ on the ball has never been a problem for Hooper:

Both of these turnovers occurred with South Africa on attack deep in the Australian 22, so they were worth their weight in Wallaby gold.

Summary
It would not have been injustice for either Michael Hooper or Samu Kerevi to have been awarded the World Player of the Year trophy in 2021. Judged purely on their individual quality of their play, they were as deserving as Antoine Dupont – as was Springbok Eben Etzebeth, who did not even make the shortlist.

Hooper enjoyed one of his best seasons, in which there was no hint of him being rag-dolled or overpowered by the enemy. He was encouraged to enjoy it by the presence of true power in the team, at numbers 8, 11 and 12. Openside flankers are there to play off power, not provide it themselves, and that is something Hooper does outstandingly.

The presence of Kerevi, Koroibete and Valetini allowed him, for once, the luxury of playing his proper role as a link player and attacker, and attending some easy first rucks in those sequences from set-piece which are so much a part of Australian rugby’s DNA.

With the likes of Taniela Tupou, Will Skelton and Lukhan Salakaia-Loto likely to play more prominent parts in the build-up to the World Cup in 2023, Hooper will only get better again when Australia has the ball.

On defence, he was just as active, supporting counter-rucks, making decisive tackles and fast steals on the deck. The new breakdown guidelines favour quicker outcomes and that suits Hooper down to the ground.

No physical heroics ‘surviving the cleanout’ any more – the kind which lost David Pocock to the game in the twilight of his career.

Instead of whingeing, Michael Hooper’s critics should be grateful that their little nugget shines ever more brightly as he moves into his thirties. It has been some journey already.