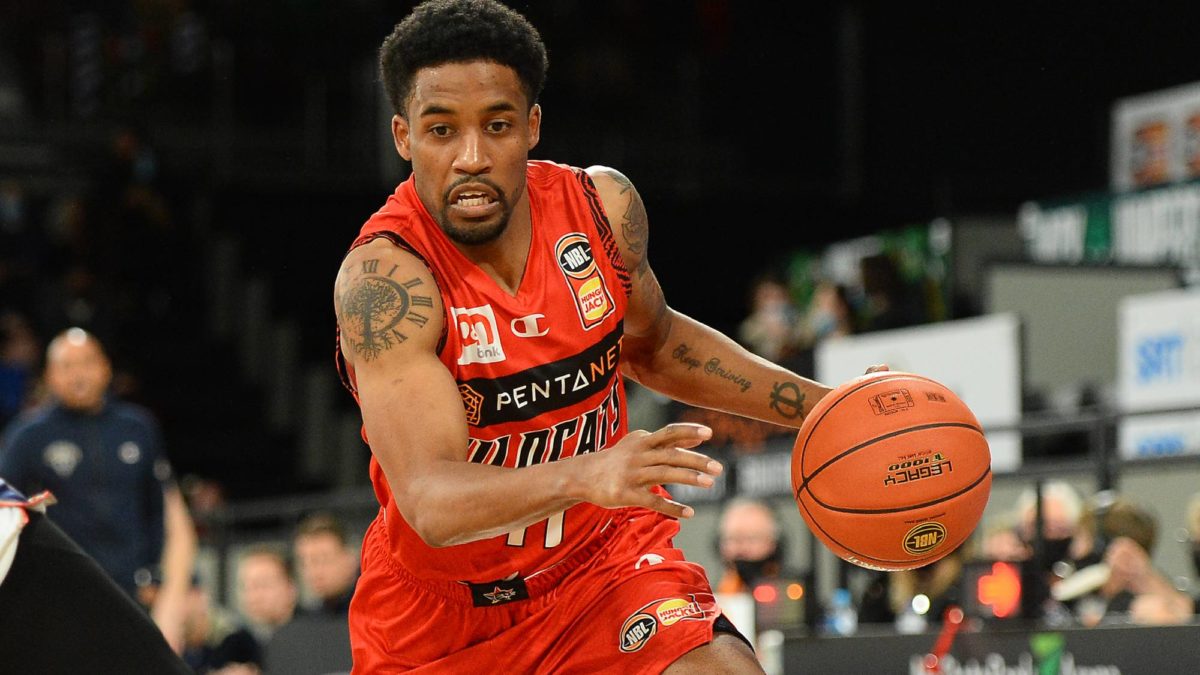 Perth Wildcats have sounded a warning to the rest of the NBL after bringing defending champions Sydney Kings’ six-game unbeaten streak to an end with an enthralling 111-104 victory.

In one of the most entertaining clashes of the season, the Wildcats moved back to fourth on the NBL ladder, whipping Friday night’s capacity crowd at Perth’s RAC Arena into a frenzy with a 35-point explosion in the fourth quarter to end a spirited challenge from the ladder leaders.

The Wildcats saw an 11-point lead wiped out by a rampant Sydney outfit in the third quarter but responded in style with a match-winning run of 17 unanswered points early in the final period to set up their third win on the trot.

John Rillie’s decision to shorten his rotation and hand big minutes to his top seven players has paid dividends during Perth’s recent hot streak as the first-year coach aims to guide the Wildcats back into the play-offs after missing the cut last season.

“When we play with a nice pace about ourselves and share the ball, we’re a good offensive team,” Rillie said after Perth connected on 17-of-35 three-pointers to topple the highest-scoring team in the league.

“We still have some possessions where we massage the ball a little too much for my liking but when we move it and get into the paint, you can see everyone benefits when we move the ball with the great pace.”

The Wildcats led throughout the first half but DJ Vasiljevic came to life in the third quarter as the Kings used a 32-point surge to build an 80-76 lead then Angus Glover opened the final stanza with a three-pointer to extend Sydney’s advantage to seven.

But Perth swung the momentum in their favour as Cotton completed a four-point play then followed up triples from Manek and Luke Travers with another long bomb to put the Wildcats ahead 93-83.

While the Kings rallied to trail by three inside the final minute, they were unable to create an opportunity for a game-tying three-pointer on their next possession.

Vasiljevic hit six triples in his game-high 26-point haul and Xavier Cooks compiled 15 points, nine rebounds and eight assists with the Kings (17-6) still on target for an automatic semi-final berth with a top-two finish.

A stunning fourth-quarter surge from the Tasmania JackJumpers has handed the second-year franchise a vital 85-77 road win over Cairns Taipans to keep them in the frame for back-to-back NBL playoff appearances.

The JackJumpers poured in the final 11 points of Friday night’s clash at Cairns Convention Centre and held the Taipans scoreless for almost five minutes to bring the home side’s quest for a franchise-best seventh successive victory to a screeching halt.

After DJ Hogg’s three-pointer handed the Taipans a 77-74 lead with 4:52 to play, Jack McVeigh came up big for the JackJumpers with back-to-back triples and Milton Doyle clinched the result with a long bomb as Cairns missed their final nine shots of the game.

McVeigh scored 11 of his team-high 18-points in the fourth quarter to inspire Tasmania to their 14th win of the season as they move ahead of Perth (12-10) into fourth spot and stay one game clear of sixth-placed South East Melbourne Phoenix and seventh-ranked Melbourne United (both on 13-12).

“The boys trust me, I love fourth quarters and big wins. I mean, this is the time of the year where basketball is at its best,” McVeigh told ESPN after his match-winning turn.

Tasmania can earn a double-chance in the league’s Play-In Tournament if they finish the regular season in third or fourth spot but need to keep winning and capitalise on losses from either New Zealand (13-10) or the Wildcats.

“We want that top four. I mean, you want two games to try and get to those semi-finals and we’re rolling, playing good basketball right now,” McVeigh added ahead of tough home assignments against Sydney and Perth before closing on the road against Illawarra.

After trading three-pointers in the opening minutes, the matchup between two of the top defences in the league produced an error-riddled first half with the Taipans and JackJumpers committing a combined 26 turnovers in the opening 20 minutes, compared to a total of 22 made baskets.

A 12-0 scoring run handed the Taipans a 17-14 edge after one quarter but Tasmania then restricted Cairns to 13 points in the second period to take a 34-30 advantage into the main break, reserve guard Matt Kenyon becoming a key contributor for the JackJumpers to lead all scorers with 11 points.

After leading by four points at halftime, Tasmania burst out to a 12-point lead in the third quarter but long-range marksman Jonah Antonio sparked the home side with a pair of three-pointers and the Taipans opened the fourth stanza with eight straight points to regain the lead.

But Cairns fell short despite strong finishes from Hogg and Bul Kuol (17 points apiece), though the return of Keanu Pinder from a six-game absence will improve their chances of securing a top-two finish.

Harvey the hero with long-range game-winner

Tyler Harvey’s miracle last-second bomb from almost midcourt has seen the Illawarra Hawks snap an 11-game losing streak with a pulsating 78-76 NBL win over the New Zealand Breakers in Auckland.

Tom Abercrombie’s steal and dunk with 10 seconds remaining on Thursday gave the fast-finishing Breakers their first lead since early in the opening term, before Harvey (25 points) replied with his massive, matchwinning dagger with 1.3 seconds on the clock.

“We all wanted that win so bad. We just tried to compete and give ourselves the best chance to win. That shot went in but it’s all the work that led up to that shot that gave us that opportunity.”

Big Dererk Pardon (19 points, 17 rebounds) was massive for the Breakers, whose fourth successive defeat – ahead of a tough task against the ladder-leading Kings in Sydney on Sunday – sees their finals prospects suddenly looking shaky.

They were left to rue a poor start as the Hawks rode an early 15-0 burst to a 27-14 quarter-time cushion, Mangok Mathiang pouring in eight unanswered points in two minutes off the bench during that run.

An upgraded unsportsmanlike foul on Abercrombie saw the visitors finish the third period with a pair of Davo Hickey free throws and a Mathiang dunk.

The Hawks’ advantage swelled to 10 points after Harvey produced back-to-back triples and a floater but NZ raced to the finish line.

Abercrombie’s steal and slam capped a 13-2 spree, before Harvey had the final say from 30 feet. 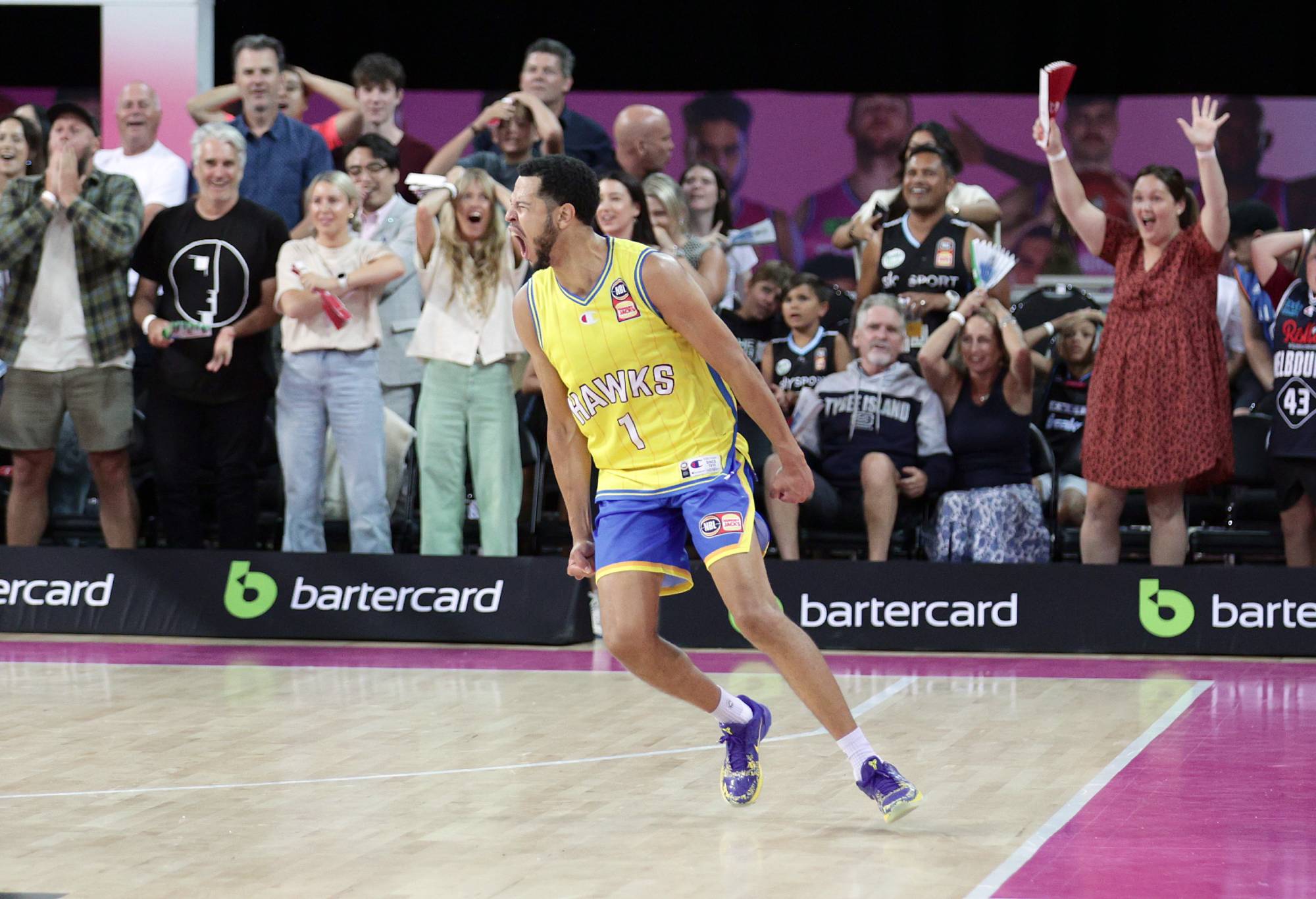 The Brisbane Bullets have all but terminated Adelaide 36ers’ NBL finals hopes with a gripping 106-101 overtime victory at Nissan Arena.

Sixth man Tyler Johnson scored 23 of his game-high 27 points after halftime on Thursday, while veteran Jason Cadee posted 22 points despite enduring bouts of dizziness to put away his former side.

Johnson’s pullup jumper with five seconds remaining in regulation put Brisbane up 91-89 before Antonius Cleveland equalised with a pair of free throws with 1.9 seconds on the clock, forcing the extension.

Brisbane, up by two points, should have had possession, but instead Franks nailed a jumper to level the scores.

In overtime, Johnson and Cadee knocked down a succession of free throws to consign the eighth-ranked 36ers to their fourth straight defeat.

Anthony Drmic (20 points), Cleveland (18) and Franks (17) all tried valiantly for the 36ers (11-13), who will almost certainly endure another idle finals campaign.

“We’ve been Jekyll-and-Hyde all season,” Adelaide coach CJ Bruton lamented. “I was proud of our fightback but it doesn’t change the result. We weren’t able to close the deal.”

Cadee, who scored 28 points in Monday’s drought-breaking win over South East Melbourne, raced out of the blocks with 14 first-term points, including nine during an 11-0 run.

Brisbane’s buffer blew out to 41-28 midway through the second quarter as Adelaide, without captain Mitch McCarron (family reasons), looked disorganised on offence and second-rate on defence.

But behind Cleveland’s stellar defence and Drmic’s perimeter shooting, the visitors unearthed a 12-2 third-quarter burst to steal the lead.

Up 70-66 inside the last 90 seconds of the third period, a technical foul on Harris for dissent saw Brisbane steal the momentum and – on Johnson’s last-second three – the lead.

The 36ers continued to chisel away but the Bullets, riding Johnson’s hot hand, displayed a relish for the spoiler role.

“We’ve obviously been on a rollercoaster this year but our leadership tonight was really good,” Brisbane caretaker coach Greg Vanderjagt said.

South East Melbourne Phoenix have revived their NBL playoff chances after snapping a five-game losing streak with a crucial 86-75 victory over Tasmania JackJumpers to climb back into calculations for a berth in the league’s Play-In Tournament.

An upset loss to ninth-placed Brisbane on Monday saw the Phoenix drop to seventh spot on the ladder but Simon Mitchell’s men produced one of their best defensive efforts of the season at Launceston’s Silverdome on Wednesday night to make a timely return to the winner’s list.

The result not only allowed the Phoenix (13-12) to reclaim sixth spot from Melbourne United but sees Tasmania (13-11) drop to fifth as the race for post-season places continues to tighten up.

South East Melbourne played like a team fighting for their playoff lives, holding the dangerous JackJumpers offence to 32 points in the first half before fending off every challenge from the home side down the stretch.

After leading his side to victory with 23 points and 11 rebounds, captain Mitch Creek was pleased to see the Phoenix secure a tough road victory after a series of heavy losses away from home.

“To (hold them to) 75 points … I’m so proud right now,” Creek told ESPN after playing a key role in the Phoenix victory with his fourth double-double of the season.

South East Melbourne’s path to a top-six finish is a difficult one with home clashes against fourth-placed Perth and top-two aspirants Cairns followed by a trip to Sydney to face the top-ranked Kings.

“We know we’ve got to win every game. You drop five (games) in a row, it’s going to put you in a bad spot but we’ve got a couple more games to go, two more at home with sold-out crowds,” Creek said about the upcoming schedule.

“Looking forward to getting home in front of the Phoenix faithful and getting a couple of wins there hopefully.”

Ryan Broekhoff connected twice from long distance in the opening minutes to hand South East Melbourne an ideal start and the defence took over to produce five JackJumpers turnovers to set up a 24-14 advantage.

Creek enjoyed a spirited back-and-forth with fellow former Adelaide 36er Jack McVeigh in the second period but it was the Phoenix winning the battle as they extended their lead to 46-32 at half-time thanks to a 30-19 rebounding edge that included 12 offensive boards.