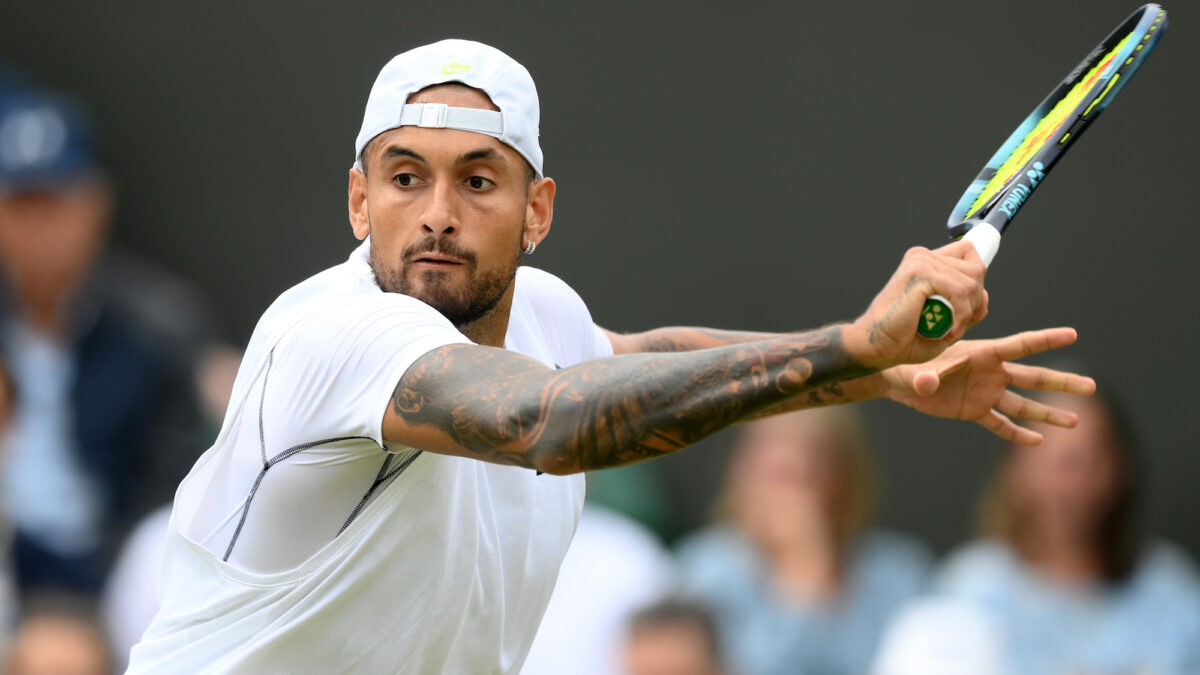 Nick Kyrgios and Ajla Tomljanovic have both returned to the Wimbledon quarter-finals after both battled tricky opponents, and themselves, while stretched to the distance, but Alex de Minaur and Jason Kubler were not so lucky.

Kicking off play on Centre Court, Kyrgios was slow to get going, losing the opening set by 6-4 after dropping serve in the eleventh game, but in typical fashion would work his way back into the match taking the next two sets, the latter in a tiebreak.

The Canberran then carelessly dropped the fourth set, to then be forced into a deciding set for the second time at these Championships.

However, he was able to regain his focus and after surging to a 5-2 lead, he served it out in the next game, the result sending him through to his first quarter-final at Wimbledon since his tournament debut as a wildcard in 2014.

It was back then, the then-19-year-old, ranked 144th in the world, caused a major upset on Centre Court by defeating then-world number one Rafael Nadal in four sets with an amazing display of tennis to make his presence known to the tennis community.

It will also be the Australian’s first Grand Slam quarter-final since getting that far at the 2015 Australian Open, where he lost to the eventual finalist Andy Murray.

Now 27, Kyrgios will start a prohibitive favourite to defeat Cristian Garin in the quarter-finals, with both men seeking to reach their first Grand Slam semi-final.

Should Kyrgios win through, he will be the first Australian man to reach a Major semi-final since Lleyton Hewitt at the 2005 US Open.

In a four-and-a-half-hour marathon on Court No.2, Garin was two sets down and faced a break point in the eleventh game of the third, but was able to dig his way out of trouble, taking the third set in a tiebreak and then winning the fourth to force a deciding set.

de Minaur then raised two match points in the tenth game, but the Chilean saved them both then won the super tie-break to complete his comeback and become the first man from his country to reach a Major quarter-final since Fernando Gonzalez at the 2009 US Open.

It was Fritz who handed the Spaniard his first loss of the season in the final at Indian Wells in March, but facing him at a Major, on Wimbledon’s Centre Court no less, will be a totally different proposition.

The King of Clay is 18-0 at the Majors this year and needs only three more wins to break his Wimbledon drought, having not saluted since 2010 when he defeated Tomas Berdych in straight sets in the final.

The other Australian in action, Ajla Tomljanovic, came from a set down to defeat Frenchwoman Alize Cornet, the third-round conqueror of top seed Iga Swiatek, in the match that followed the de Minaur-Garin epic on Court No.2.

It is the first time she has won a completed Grand Slam fourth round match, after her opponent last year, Emma Raducanu, was forced to retire due to breathing issues.

But despite matching her quarter-final result at Wimbledon from twelve months ago, Tomljanovic’s ranking will drop into the 70s due to the rankings points ban, meaning she will almost certainly be unseeded at the US Open next month. 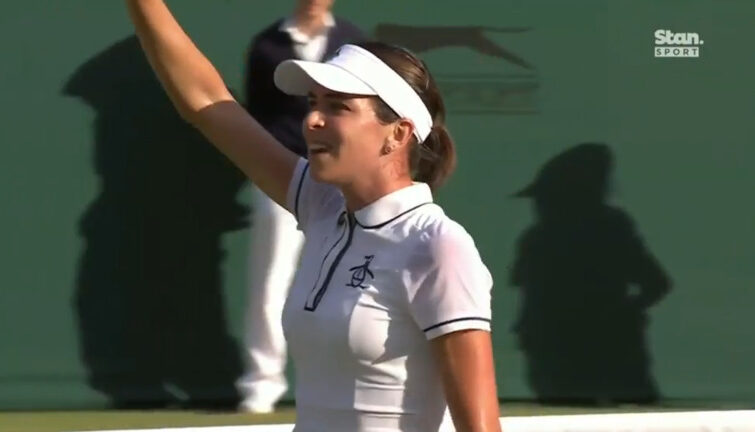 Nonetheless, she became the first Australian woman to reach consecutive quarter-finals at the All England Club since Jelena Dokic in 1999-2000.

And for the first time since Dokic and Rafter in 2000, Australia has a chance to have a semi-finalist on the men’s and women’s side.

The 29-year-old next goes on to face 17th seed Elena Rybakina, who had it slightly easier defeating Petra Martic in straight sets.

In other results, 16th seed and 2019 champion Simona Halep sprung a surprise thrashing fourth seed Paula Badosa 6-1, 6-2 in just 59 minutes, reinforcing her status as a title contender and exposing the 24-year-old as a Grand Slam novice.

The Romanian was playing on Centre Court for the first time since the 2019 final, in which she handed Serena Williams her worst defeat in a Major final, and made a triumphant return to the court with a similar display against the shell-shocked Badosa.

She took the opening set in just 22 minutes, but while the second set lasted 17 minutes longer than the first, it was still just as one-sided as Halep broke serve five times and saved the only break point she faced throughout.

It was her second straight-sets thrashing of the Spaniard from as many meetings, after dropping only four games in their clash at Madrid earlier this year.

Badosa was the second-last remaining top fifteen seed to depart the All England Club, leaving third seed Ons Jabeur as the highest-remaining player in the draw.

Halep next goes on to face American upstart Amanda Anisimova, who put an end to the run of Williams’ first-round conqueror Harmony Tan with a 6-2, 6-3 win which took an hour and fourteen minutes to complete.

In contrast to the experience of Halep, this will be Anisimova’s first Wimbledon quarter-final, but she will not be fazed by the task she will face on Wednesday night AEST.

The 20-year-old won their quarter-final duel at Roland Garros in 2019, ending Halep’s title defence in the process, and earlier this year saved a match point to oust defending champion Naomi Osaka at the Australian Open before bowing out to eventual champion Ashleigh Barty.

Naturally, she has been dubbed “the next Maria Sharapova” but she has gone on record saying she would prefer to be known for the way she plays and not how she looks up to the since-retired Russian (who by the way is expecting her first child later this year).

The men’s and women’s quarter-finals get underway tonight (AEST), with Novak Djokovic to face Italian upstart Jannik Sinner in the first match on Centre Court, followed by women’s third seed Ons Jabeur taking on Marie Bouzkova from the Czech Republic.

On No.1 Court, Tatjana Maria and Jule Niemeier face off in an all-German battle, before David Goffin faces ninth seed Cameron Norrie, who will have the hopes of a nation on his shoulders as he looks to emulate Andy Murray’s title-winning efforts from 2013 and 2016.

Matches to watch on Day 9