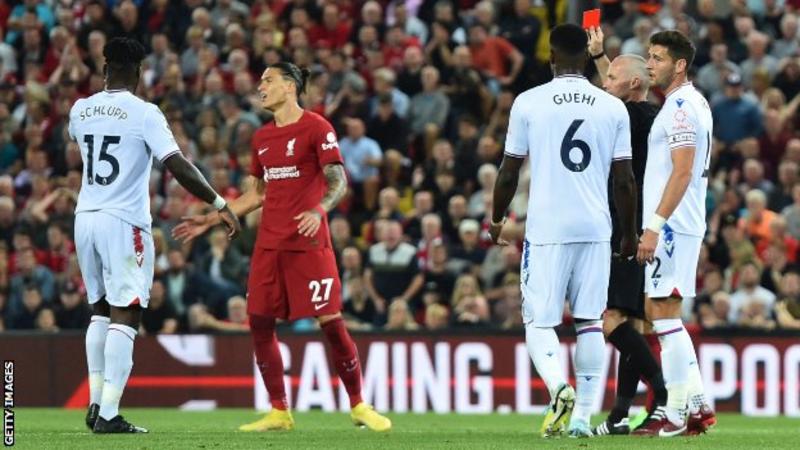 Manager Jurgen Klopp has promised new striker Darwin Nunez will learn from his nightmare home debut for Liverpool and come back stronger.

As Anfield bows go it could not have been much worse for the £64m summer signing from Benfica, who was shown a straight red card for a headbutt on Crystal Palace defender Joachim Andersen.

He became only the second player to be sent off in their first Premier League game for Liverpool at Anfield, after Joe Cole against Arsenal in 2010.

“Darwin knows he let his team-mates down. I will leave him alone for a night and then talk to him tomorrow,” said Klopp.

The Uruguay forward will not relish that awkward conversation, perhaps made a little easier by Luis Diaz’s stunning second-half equaliser just minutes after Nunez saw red.

Nunez learns harsh lesson as Liverpool under pressure
Nunez, who scored on his debut on opening day in a 2-2 draw at Fulham, will now miss the next three games – but how costly could his moment of madness be?

“Of course it was a red, he was provoked but that is not how he should behave,” said Klopp.

Nunez has only been sent off once before in his career, in his first season at Spanish club Almeria, where he made his professional debut in 2019.

The following year he moved to Benfica for £35m and, after scoring 32 league goals in 57 league appearances, earned a dream summer move to the Premier League.

Former Liverpool defender Jamie Carragher now fears the young striker will have a wait before he is given a second chance to make a first impression on the Kop faithful.

“He knows what he has done and he will be absolutely devastated. He has let himself and the team down,” said the former Liverpool defender on Sky Sports.

“If he had been on the pitch, I am sure Liverpool would have won the game. It is not just tonight, we might not see him back in full flow for five weeks now.”

Nunez may well have suffered a harsh lesson on home turf, showing the kind of short fuse that will have pricked the attention of other opposition defenders, but Gary Neville is confident he will learn from it.

“It was a moment of madness,” he said on Sky Sports. “We saw in the first two games that he is combative. It was a proper butt to the under side of the nose.

“But he will learn a lot from that. I have done things like that in my career, we don’t know why we react as footballers. You do things and you come off and think ‘what have I done’. It is that red mist.”

Neville was impressed, however, by Liverpool’s response, but expressed concern at the impact Nunez’s three-match suspension will now have on the start to their season.

They have already dropped four points in draws at Fulham and against Palace, and face a trip to Old Trafford before home games against Bournemouth and Newcastle without their key summer signing.

‘Do we have a witch in the building?’
Klopp had his own theory on the bad luck that has dogged the start of their campaign, following injuries to a string of key players, including creative forces such as Thiago and Roberto Firmino.

“We had a really tricky week,” said the Liverpool boss. “Every day someone pulls up. And you think ‘what is going on here – do we have a witch in the building?’”

Despite the bad fortune, Klopp said he was “proud” of Liverpool’s response and was full of praise for Diaz’s sensational equalising goal.

Carragher agrees that the 25-year-old Colombian forward could fill the void left by the summer departure of Sadio Mane to Bayern Munich.

“If this lad can get the goals Mane did, I think he could become an absolute super star in the Premier League,” said Carragher, after Diaz added a fifth goal in 15 Premier League appearances for Liverpool.

“He never stops running and has such ability in close control, and such composure. We judge all the top players on numbers. He has looked a top player in general play, he has been sensational, but to be up there with [Mohamed] Salah and Mane, he needs to get the goals.”