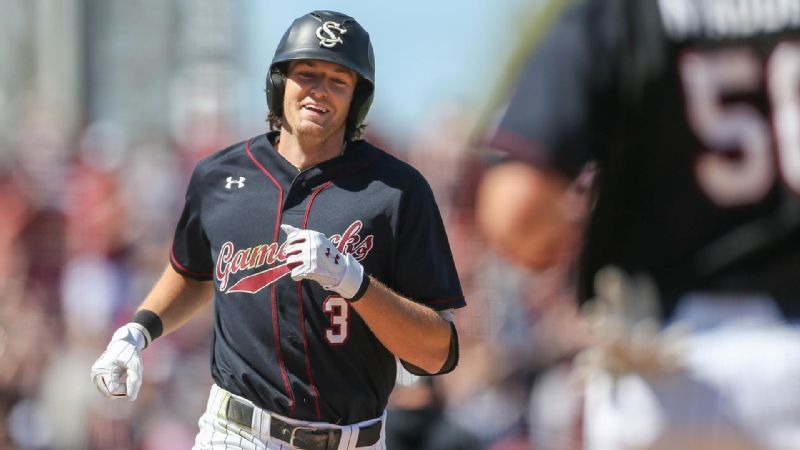 COLUMBIA – Braylen Wimmer belted two home runs and a trio of pitchers from the Palmetto State combined to give the University of South Carolina baseball team an 8-6 win over No. 4 Vanderbilt Saturday afternoon (March 26) at Founders Park. The Gamecocks won the series from the Commodores, its second series win over a top-five team this year.

Wimmer was a perfect 3-for-3 at the plate with five RBI and three runs scored while Brandt Belk and Kevin Madden added two hits apiece in the win.

Carolina was down 3-0 heading to the bottom of the fourth, but Wimmer’s first home run cut that lead to one run. The Commodores answered with two in the fifth but Carolina took the lead for good in the bottom of the frame. Josiah Sightler and Evan Stone both walked. After a strikeout, Madden brought in a run with a single. Wimmer then connected on his second home run, this one a three-run blast into the Carolina bullpen.

The Gamecocks added two insurance runs in the seventh on RBIs from Michael Braswell and Colin Burgess. A Spencer Jones home run in the eighth ended the scoring. Carolina turned a 4-6-3 double play ended the game and gave the Gamecocks the series win.

Aidan Hunter earned the win in relief, striking out three and allowing two hits with no walks in 2.1 innings. Cade Austin earned his first save of the season, pitching the final two frames. Matthew Becker earned the start. He struck out four and allowed seven hits and four earned runs in 4.2 innings.

Carolina closes out its homestand on Tuesday night (March 29) against Presbyterian. First pitch is set for 7 p.m. and the game will be on SEC Network Plus.