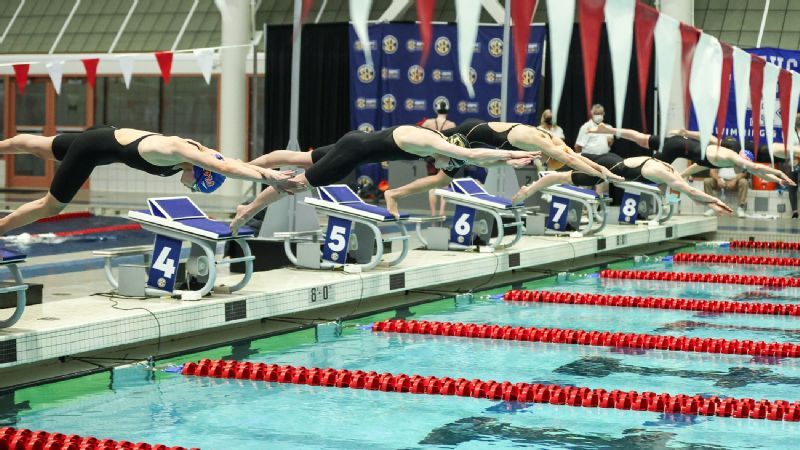 A Scholar All-American, school record holder, SEC scorer and member of the SEC Academic Honor Roll, Voelkerding has worked extensively in the community during her Crimson Tide tenure. She has given her time to the Alberta Head Start reading initiative, the Crimson Tide’s Halloween Extravaganza, working with children at the Belk Activity Center, the Lee County Tornado Relief efforts, A Night to Shine and Project Angel Tree. Voelkerding graduated from Alabama in December 2021 with a bachelor’s degree in public health and is currently finishing her MBA as part of UA’s Stem to MBA program.

Leehy is a graduate transfer from Houston where she swam the previous four seasons. While in Houston, she helped put on holiday events for kids at M.D. Anderson Hospital. Leehy walked dogs and cleaned kennels for Houston Pets Alive. She also worked with the Houston Food Band where she created lunch bags for kids to have lunches. Since coming to Auburn, Leehy has given her time to help instruct swimmers as a part of the Special Olympics Swimming program at the Opelika Sportsplex. She also previously served as a meal site volunteer back in her hometown of Council Bluffs, Iowa.

Hatton worked with the Night to Shine Prom. At the prom, he helped to take pictures with those attendings, play basketball, and even be paparazzi. She also had been involved with the Student-Athlete Advisory Committee.

Hartman has volunteered in each of the past two years with the UGA Campus Kitchen’s Turkeypalooza campaign, providing Thanksgiving meals to members of the Athens-Clarke County area. She also worked with the Wellspring Living Shelter in a hoodie drive, assisting victims of child sex trafficking and with the UGA Athletic Association in assisting The Salvation Army in its 2021 holiday bell ringing campaign. Hartman worked with Team Impact in continuing to foster the relationship between the Georgia swimming and diving team and Mycah Wallace, a young Leukemia survivor, who was “signed” to the program in March 2020. She is a member of the Leadership, Education, and Development Academy (L.E.A.D.), a 40-member group that helps student-athletes build leadership skills, network with professionals, and facilitate personal growth, as well as a team representative on the University of Georgia Student-Athlete Advisory Committee. Hartman has been named to the SEC Academic Honor Roll and J. Reid Parker Director of Athletics Honor Roll in each of her first two seasons. She was the recipient of the Lisa Coole Memorial Swimming and Diving Scholarship for three consecutive seasons. In the water, she has earned 14 All-America citations.

Orcutt has contributed 119 hours of community service so far during the 2021-22 academic year. Organizations she has volunteered with throughout the Lexington community include the Salvation Army, Southland Christian Church, Christmas Miracles Project, Amachi, God’s Pantry, Kentucky Children’s Hospital, ACE Elementary School, Southland Children’s Ministry, the Veterans Administration, and the Ronald McDonald House. Some of her many community service projects have included serving as a mentor, leading youth activities, packaging and delivering food, collecting and donating school supplies, and creating holiday celebrations for families in need. Orcutt holds a 4.0 grade-point-average as a psychology major. In the pool, Orcutt was part of the Kentucky team that won its first-ever SEC Championship title in 2021. She was named to the 2020 SEC First-Year Academic Honor Roll. Orcutt also won the Community Service Award at the 2021 CATSPY Awards, UK Athletics’ annual award banquet.

Kucsan is one of the leaders for LSU’s division of the Student-Athlete Advisory Committee. During 2021 and the early days of 2022, she has served eight different events, including the St. Jude Walk/Run and Girls on the Run 5K. She wrote cards to healthcare and dining hall workers at the Our Lady of the Lake Hospital. Kucsan aided the Halloween BOOzar, an annual free event that provides a safe and fun environment for children of all ages and their families to enjoy trick-or-treating activities and carnival games while interacting with LSU student-athletes. She also helped out with the donation drive in the aftermath of Hurricane Ida and the SAAC Sock Drive. An elementary education major, Kucsan has substituting for teachers unable to attend school.

Feddersen volunteers weekly with Special Olympics swimming and with kids ministry at The Crossing Church. She has worked with local schools as a guest speaker at John Warner Middle School, as part of the SAAC pen pal program with Benton Elementary and with virtual announcements at Battle Elementary. Feddersen also has worked with Habitat for Humanity, Swim Across America and Columbia Foster and Adoption Project. She claimed All-America First-Team honors as part of Mizzou’s fourth-place 200 free relay at the 2021 NCAA Championships. She was also named to the 2021 All-SEC Second Team and the 2020-21 Winter SEC Academic Honor Roll.

Scheider has worked over 200 community service hours in her career at South Carolina, mostly at the Free Medical Clinic and at the Crisis Text Line. She volunteered at the Free Medical Clinic in Columbia, SC as a medical assistant and her duties included taking vitals, EKGs, urinalysis, and blood glucose checks. Scheider also triaged patients, cleaned the facility, and helped patients fill out their financial assistance forms. For her work with the Crisis Text Line, she completed a 30-hour training to be able to volunteer. Her duties involved being an online moderator for people to anonymously write in where she could guide them through tough situations and mental health crisis. Scheider also participated in team community service events such as Relay for Life throughout her time at South Carolina. She is a three-time SEC Academic Honor Roll member (2019, 2020, 2021) and secretary of the Pre-PA student group on campus. Scheider is also a member of Alpha Epsilon Delta, an honor society for health professionals.

A member of Tennessee’s VOLeaders Academy Class of 2021-22, Lady Vol diver Holt has been active in the community, accumulating over 30 hours of community service since July. This summer, she will be a part of a cultural exchange trip to Botswana. Holt assisted with volunteer opportunities through Knoxville Area Rescue Mission (KARM) as well as various elementary schools around the city. With KARM, she helped write inspirational notes and decorate cards given to residents of the “Every Bed, Every Night” program. In the local schools, Holt spent time assisting the school nurse along with leading and teaching students different activities during PE class.

Wright has dedicated her time away from the pool and the classroom to a number of organizations in the community. She has served with BCS Together, which works with families and children touched by the child welfare in the Brazos Valley, and also spent time volunteering with the local Boys and Girls club. Wright has also given her time to AggiesCAN, the largest student-athlete run canned food drive in the nation, as well as REVed up to Read. She has served as a team representative with the Student-Athlete Advisory Committee for two years and has been an ambassador for the 12th Man Foundation’s 1922 Fund. Wright is a multi-year SEC Academic and AD Honor Roll member. Abby Burke, Senior, Vanderbilt Burke participates in activities at the Cross Point Church in Nashville and has also volunteered with Vanderbilt Project Safe Center and Voter Registration Day activities in 2020. She has also taken part in volunteer events at Buena Vista Elementary School, helps the Nashville Dolphins swim team and contributed to the Vanderbilt Dance Marathon during her time in school. After making the 2018-19 First-Year Academic Honor Roll, Burke has been named to the SEC Academic Honor Roll each of the last two seasons.

Burke participates in activities at the Cross Point Church in Nashville and has also volunteered with Vanderbilt Project Safe Center and Voter Registration Day activities in 2020. She has also taken part in volunteer events at Buena Vista Elementary School, helps the Nashville Dolphins swim team and contributed to the Vanderbilt Dance Marathon during her time in school. After making the 2018-19 First-Year Academic Honor Roll, Burke has been named to the SEC Academic Honor Roll each of the last two seasons.