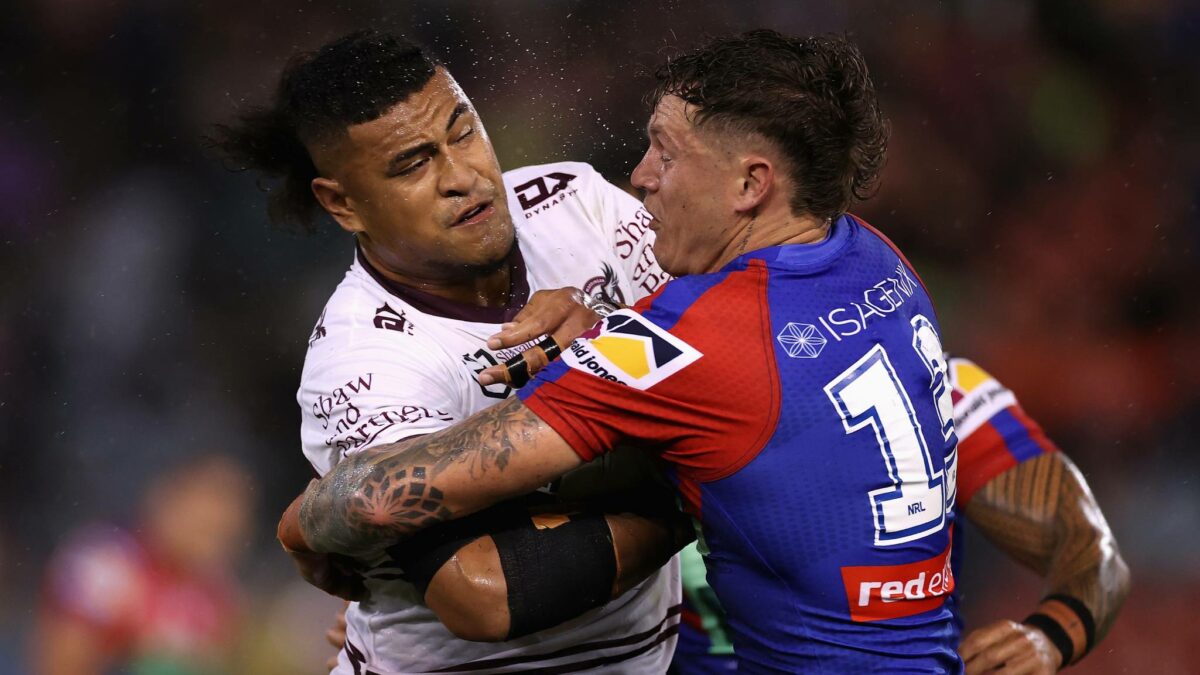 Newcastle have endured a night to forget, losing two men to injury as they went down 30-6 to a Manly side missing star man Tom Trbojevic.

The Sea Eages played in the driving rain far more effectively and didn’t miss their talismanic fullback, with three late tries from their forwards enough for an eventually comfortable victory.

The contest was marred by a series of errors – 24 in total – and infractions – 23 penalties and set restarts – as well as key losses to injury; especially for Newcastle, who played the bulk of the game with only two on the bench.

Dom Young suffered a knee injury early on and Jarah Momoisea appeared to fracture an arm, while Adam Clune was forced to soldier on with nobody able to replace him.

Marty Taupau also managed just 23 minutes for Manly before being withdrawn after an injury sustained in the very first tackle of the game.

Newcastle coach Adam O’Brien refused to blame the injuries, instead pointing to his team’s completion rate of 67 per cent compared to Manly’s 82 per cent, as well as the errors that consistently hampered the Knights.

“I’m not using that excuse. We get used to that sort of stuff and we rise above it,” he said of the injuries.

“The guys won’t be getting the excuse of personnel, because clearly, we need to get better.

“I thought Manly gave us some lessons on how to manufacture some tries in the wet. There was (Daly) Cherry-Evans with his kicking game; much the same as he did last week to the Raiders, he’s done to us tonight.

“It’s hanging on to the footy and then what you do with it. They did throw attack at us at times with those high completions and when they marry up, you can finish your sets with high-note kicking and chasing. They beat us in all those areas.”

Following a week where the return of the wrestle has been debated to death, Manly’s ability to control the ruck speed, complete high and kick well was the key to their victory in the difficult conditions.

O’Brien might also look at a penalty count that saw the Sea EEagles regularly slow the ruck and concede penalties and set restarts, yet fail to be punished further by referee Ashley Klein.

In particular, a crucial period at 10-6 to Manly in the second half was marred by several slowing penalties that should have seen a Sea Eagle in the bin. Newcastle’s six set restarts to two told a story. 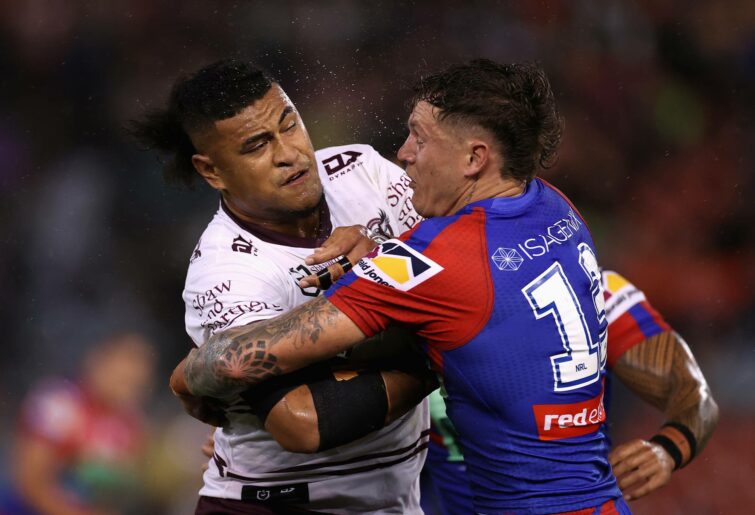 NEWCASTLE, AUSTRALIA – APRIL 07: Haumole Olakau’atu of the Sea Eagles is tackled by Kurt Mann of the Knights during the round five NRL match between the Newcastle Knights and the Manly Sea Eagles at McDonald Jones Stadium, on April 07, 2022, in Newcastle, Australia. (Photo by Cameron Spencer/Getty Images)

Manly eventually weathered the storm – both on the field and from the skies – to cash in with three late tries from Karl Lawton, Haumole Olakau’atu and Taniela Paseka that blew out the scoreline as the Knights tired badly.

Sea Eagles coach Des Hasler was happy to see his forwards get their returns at the end.

“It was that type of game,” he said. “They dominated in the middle and it was always going to be won there.

“To add to that, we’ve had a strong focus on our attitude to defence, so it’s great to hold them to a try.

“I was really happy with the way we came off a short turnaround and presented ourselves to play.

“Newcastle has always been a tough place and it’s not an easy win, so to get out with two points in tough conditions is important to us.”

The signs were clear early on that this was going to be a battle against the conditions as much as the opposition.

Both Cherry-Evans and Jake Clifford had already expressed a clear preference for the low, hard kick over the bomb to trouble the Knights’ back three.

That isn’t to say that there wasn’t an attempt to play football. Newcastle in particular sought to spread the play wider and this was where they found their first joy, with Dane Gagai feeding Dom Young to cross.

The bunker disagreed, however, and found an obstruction in the build up. To compound the pain, Young hobbled off with a knee complaint sustained in the scoring of the non-try and did not return, and will need scans.

Manly had barely been in the Knights’ end, but they produced their best set of the night to open the scoring.

Jason Saab, much maligned of late, crunched Ponga, with an error swiftly following. The Sea Eagles ground their way into good ball, and a simple short pass from Dylan Walker got Andrew Davey over the line.

As Newcastle’s error count grew, Manly began to take over. Cherry-Evans had already attempted the dink behind for Saab to chase, and with Ponga off the field for a HIA, there was nobody at home as Morgan Harper raced through.

The Knights will be enraged that their fullback was missing as a result of a high tackle from Harper himself, who was put on report but not binned.

Jirah Momoisea then departed with a suspected broken arm, leaving Newcastle with three off the field before half time.

Ponga came back after the break with impressive impact. Bradman Best got the better of his individual battle with Harper – not for the first time – and created space for Enari Tuala, who found his fullback to get the Knights on the board.

What followed was perhaps the key period of the game. Newcastle were on top, but Manly managed to limit their effectiveness through a combination of well-marshalled defence and cynical delaying. Klein waved his arm and blew his whistle, but never went further.

Connor Randall blew a huge chance to level the scores, failing to ground a Ponga kick; it was the last chance that the Knights would get.

Soon after, they were on the wrong side of a Captain’s Challenge in front of their own posts and Reuben Garrick added his third of the night to extend the lead to a converted try.

The Knights were tiring and Manly struck again. It was the simplest of tries, with Josh Aloiai gaining a quick play the ball and Karl Lawton diving over from yards out. The lack of replacements was starting to tell, with a tired Phoenix Crossland and Daniel Saifiti caught standing by the fresh legs of Lawton.

It didn’t get any better. Dylan Walker, excellent in this grind of a game, was again the difference-maker. His kick slipped behind the line and Haumole Olakau’atu reached it in time.

Taniela Paseka was the last to cash in: Lawton got the kick this time, with the big forward touching down.

It was telling that the three key figures in the score blowing out – Lawton, Walker and Paseka – had all come off the bench, where Newcastle had nobody to bring on.

The Knights’ minds were willing, but the legs were gone.