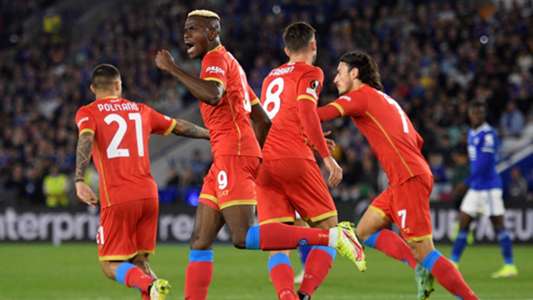 Harvey Barness assisted Perez Ayoze in the ninth minute to send the home fans at Liberty Stadium to a frenzy. Patson Daka was denied by VAR in the 59th minute. But five minutes later, Barnes scored after Nigeria striker Kelechi Iheanacho found him in the danger zone following a swift counter-attack.

Super Eagle Osimhen pulled one back in the 69th minute for the Serie A heavyweights after converting a Fabian Ruiz pass, before completing his brace with three minutes to go. Matteo Politano was the provider.

“We had some [Leicester] players getting their first 90 minutes of the season as well, and then obviously, their big striker [Osimhen], who is £70-odd-million, so you can see his quality, and he gets his two goals,” Rodgers told the club’s official portal .

The tactician was also impressed by Zambia international Patson Daka who was impressive as well as Boubakary Soumare.

“I thought [Soumare] was excellent in the game. He had a little spell at the beginning of the second half,” Rodgers continued.

“He looked a little leggy, but then he’d done one or two pieces of skill and came back into the game. He was good. That was his first 70 minutes, so I am delighted with that.

“[Daka] is always a goal threat. [I am] disappointed that he could not get the goal, because it was a great finish, but players are young [and still] learning at their level, and how we work, and I am sure they will prove to be very, very good players this season.”

The manager went on to reveal what he told the players.

“I said to the players afterwards, there were so many good things in the game, but we’ve got to keep the ball better because by the end when you don’t have the ball so much and you’re chasing the game, you can tire that little bit.”

“Overall, if you can’t win it, even though we were in a good position, you make sure you don’t lose it and the point is a start for us. Now, we have got another nine [points] or 10 to go.”

Napoli and Leicester are now joint second with a point in Group B. Legia Warsaw, who defeated Spartak Moscow by a solitary goal, are at the summit.