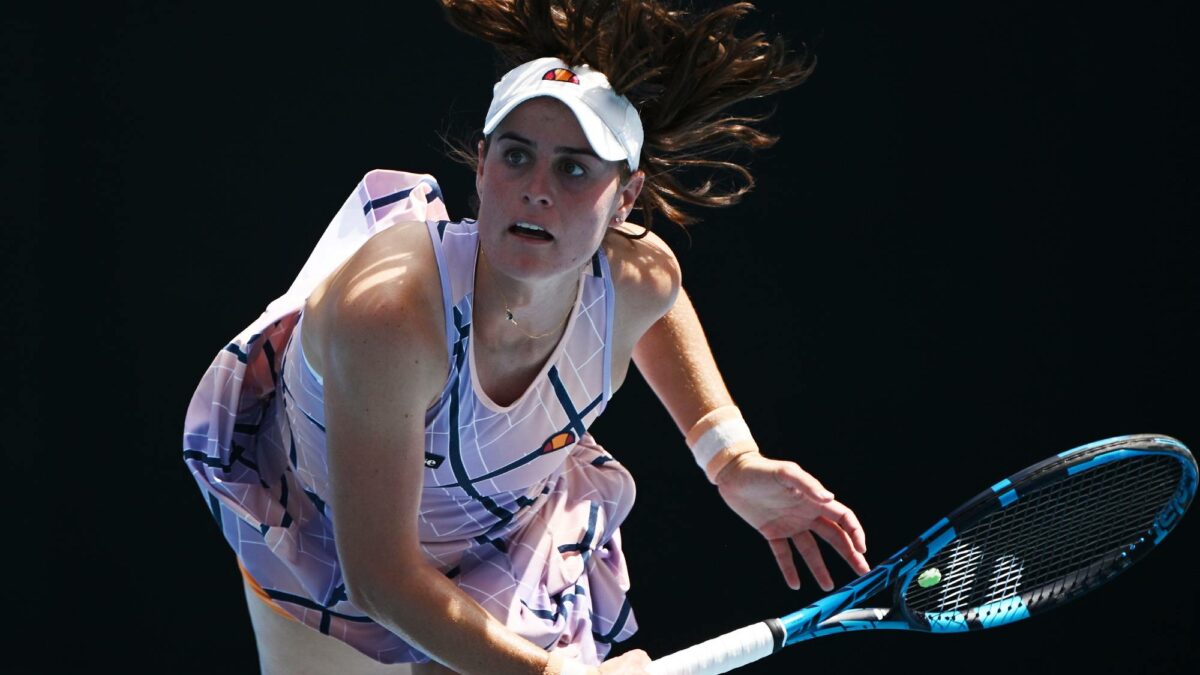 Gutsy Queenslander Kimberly Birrell has hung tough to turn up the heat on veteran Kaia Kanepi, sending the part-time ice road trucker packing in the first round of the Australian Open.

The Estonian No.31 seed served for the match at 5-4 in the second set, but Birrell fought back before powering through the third set to win 3-6 7-6 (7-4) 6-1 in two and half hours as the temperature soared past 35 degrees at Melbourne Park.

The 24-year-old became one of just two Australian women to advance to the second round at their home slam this year, joining Olivia Gadecki, who beat Russian Polina Kudermetova on Monday.

Kanepi, 37, drives trucks in her native country in her spare time and for much of the deciding set on Tuesday she looked like she’d rather be back there – or anywhere else really – rather than slugging it out with Birrell under the blazing sun at Kia Arena.

Birrell’s only two previous victories at grand slam level came during her run to the third round of the 2019 Australian Open. 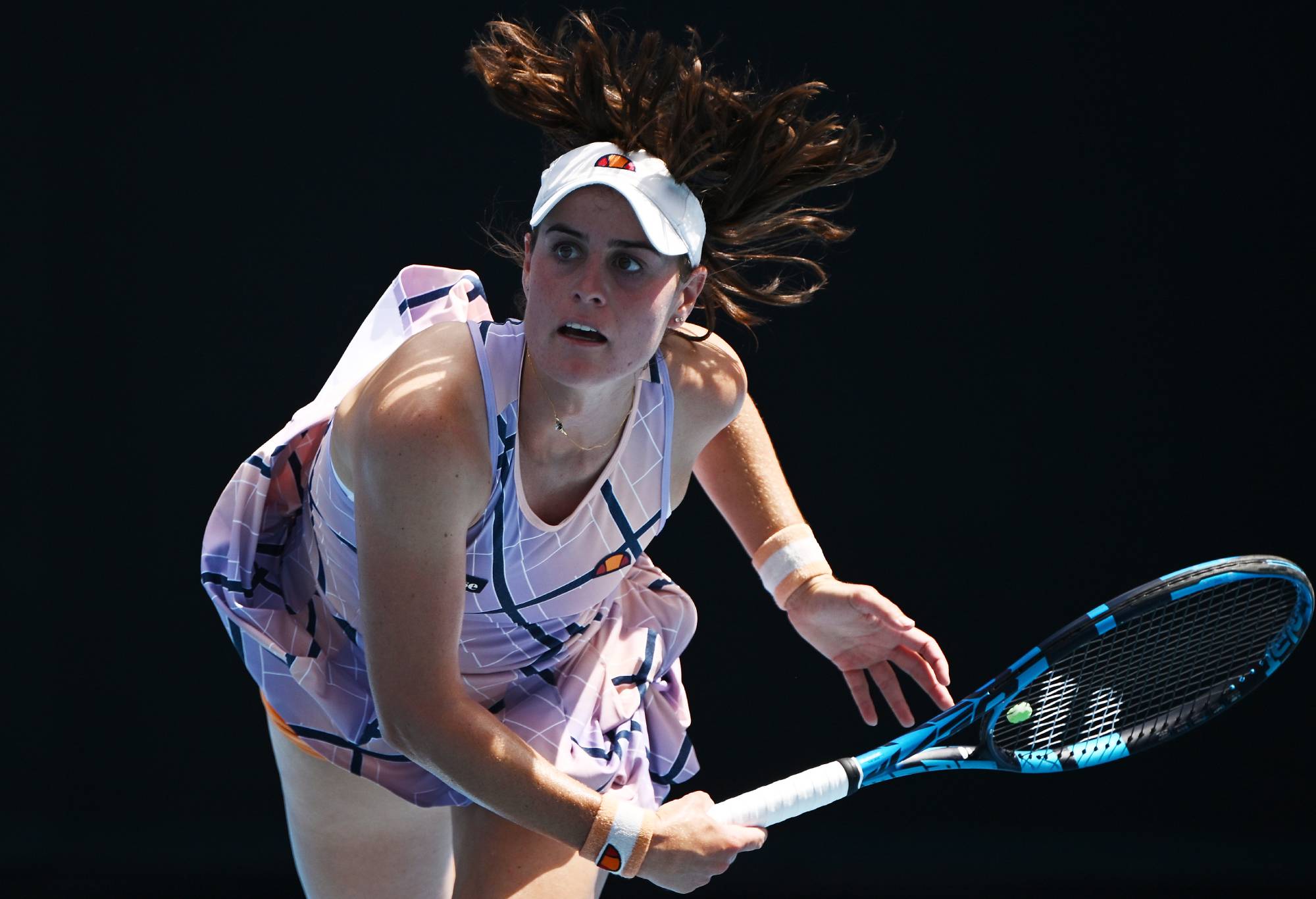 Tuesday’s triumph was even more satisfying as she has battled a series of serious injuries in recent years.

“I would say that even without this win today it was all worthwhile,” Birrell said.

I’m doing what I absolutely love … living the dream.”

Birrell took full advantage of her late wildcard into the 2023 tournament, which only became available when former world No.1 Venus Williams handed it back after suffering a leg injury at the warm-up event in Auckland.

Kanepi has reached the quarter-finals seven times at the majors, most recently last year at Melbourne Park.

It seemed likely that all of that big-match experience would be telling late in the second set on Tuesday, only for Birrell to turn the tide and break back for 5-5 before holding her nerve in the tiebreaker to force a decider.

“To be honest, I was trying not to think about it,” said Birrell. I knew she was a quality player and I know how deep she has gone in slams.

“Congrats to her for all the success she’s had, but I’m just so happy that I won today and get to play here again.”

Countrywomen Storm Hunter and Talia Gibson were both eliminated on day one.

Australia’s highest-ranked female player Ajla Tomljanovic was forced to withdraw with a knee injury two days before the tournament began.

Heat stops play on outside courts

The extreme heat policy has been enacted on a scorching day two of the Australian Open, with play suspended on the outside courts at Melbourne Park.

The high-profile round-one encounter between former world No.1 Andy Murray and No.13 seed Matteo Berrettini will now start and finish under the roof on RLA.

The air temperature is above 35 degrees in Melbourne and is set to soar beyond the forecast maximum of 36 degrees.

Play on the outside courts will not resume until 1600 (AEDT) at the earliest.

Garcia, Sabalenka into Open second round

Title forces Caroline Garcia and Aryna Sabalenka have wasted as little time as possible in the searing heat to surge into the Australian Open second round at Melbourne Park.

Two months after clashing in the elite season-ending championship final in Texas, Garcia and Sabalenka both won in straight sets in little more than an hour on court on Tuesday.

Fifth-seeded Sabalenka continued her unbeaten start to the year with a 6-1 6-4 dispatch of Czech Tereza Martincova in 69 minutes before Garcia crushed Canadian qualifier Katherine Sebox 6-3 6-0 in 65 minutes.

“I definitely need to cool down,” Sabalenka said as the mercury in Melbourne hit 33C. “It wasn’t an easy match and I’m super happy with the win.”

Yet to drop a set in five matches in 2023 after reigning at the Adelaide International, the Belarusian looms as a serious title challenger after reaching the semi-finals of the US Open in September on similarly fast hard courts.

But the 25-year-old is competing without the presence of her national flag at Melbourne Park after Tennis Australia on Tuesday banned Belarusian and Russian banners from the season-opening grand slam.

Russian and Belarusian players are only allowed to compete at the Open under a neutral banner following the ongoing invasion of Ukraine.

“I really thought that like tennis – not tennis, just the sport – is nothing to do with politics,” Sabalenka said. “But if everyone feels better this way, then it’s okay. I mean, I have zero control on it. What can I say? They did it, okay, no flags, no flags. Okay.”

Sabalenka is waging her own battle to finally claim her maiden major after years carrying the tag of being one of the sport’s best players without a grand slam title.

Runner-up to Garcia at the season-ending WTA Finals in November, Sabalenka plays American Shelby Rogers in the second round on Thursday.

The Frenchwoman was ranked 70th when she lost in the first round last year in Melbourne to world No.165 Hailey Baptiste.

“First round of the first slam of the year, I was not really expecting to come here as the No.4 seed so I’m very grateful to play on RLA – it’s my first win here so I’m very happy,” she said.

“We always say that things can go very quickly.”

Rublev, Dimitrov into second round

Fifth seed Andrey Rublev has eliminated former finalist Dominic Thiem to be the first big name through to the Australian Open second round on day two at Melbourne Park.

Thiem is on the comeback trail after a long recovery from wrist surgery but Rublev was still relieved to progress on Tuesday.

“I know that (Dominic’s) not going through an easy time so I want to wish him all the best to come back on the level that he belongs,” Rublev said.

A six-time grand slam quarter-finalist eager to take the next step at a major, 25-year-old Rublev will face either Australian qualifier Max Purcell or Finland’s Emil Ruusuvuori on Thursday.

Fans have been barred from displaying Russian and Belarusian flags at the Australian Open after an incident at a match on Monday involving Ukrainian player Kateryna Baindl.

Russian and Belarusian players are allowed to compete at the first grand slam tournament of 2023, but must do so under a neutral banner.

They were banned by the All England club from participating at Wimbledon last year in reaction to Russia’s ongoing invasion of Ukraine.

Tennis Australia (TA) had initially permitted spectators to bring Russian and Belarusian flags to Melbourne Park, as long as they did not cause disruption.

But that policy was reversed on Tuesday morning after a Russian flag was prominently displayed courtside during Baindl’s three-set victory over Russian Kamilla Rakhimova, drawing condemnation on social media from Ukraine’s ambassador to Australia Vasyl Myroshnychenko.

“Flags from Russia and Belarus are banned onsite at the Australian Open,” TA said in a statement. “Our initial policy was that fans could bring them in but could not use them to cause disruption.

“Yesterday we had an incident where a flag was placed courtside. The ban will be effective immediately. We will continue to work with the players and our fans to ensure that this is the best possible environment to enjoy the tennis.”